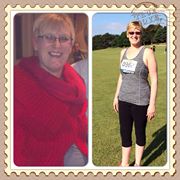 My son had been a member of Newark Martial Arts for some time and, with his encouragement, in early 2013 I decided to give bootcamp a go.

I’d tried gyms before but have never had the self-motivation to get on with it. Obviously I was slightly terrified of what it was all about, so I took a friend along with me. After three weeks I was hooked (my friend wasn’t) and at that point my journey began.

During 2013 I was doing bootcamp once or twice a week but although I could feel myself getting fitter, I wasn’t losing weight. I know now that having fish and chips on the way home from the class is NOT the way forward!

In March this year, I was challenged to take part in a 5k obstacle course being held in June. I was told that I wouldn’t be able to manage it….game on!

I spoke to Lewis, who agreed to train me and get me ready. I also needed to lose weight; this had become a major issue over the years and has left me feeling unconfident in my abilities when training.

In the first session, Lewis tested me to see what my capabilities were or more importantly could be – getting on that treadmill for the first time almost killed me, I’ve never been a runner even as a child. We discussed a change in my diet and planning meals….My journey had begun!

By the end of the first month, I was already fitter and had lost over half a stone. I gave up my pick-n-mix, my curry on a Friday and the mid-week take-aways. I still needed to have a cheat day though – I have a great social life and I didn’t want my training to impact on that. So I spoke to Lewis and we agreed that I train Friday, I weigh in on Saturday morning and then Saturday is MINE!

It’s working well so far. I did injure my knee in that first month but, with “support” and amending the exercises during bootcamp and PT sessions, I’ve been able to carry on throughout.

By 21 June, the date of the obstacle course, I’d reached a two stone weight loss and, with my husband, son and friends, I got round the course in 1 hour 5 minutes. Six months ago (probably even three months ago!) I wouldn’t have contemplated doing it and certainly wouldn’t have survived it. I was overwhelmed with a feeling of achievement….

My family, friends, and work colleagues have been impressed with my progress and have been fully supportive. I’ve never stuck at something like this before. It’s not been easy, but should it be…?

Moving on, some of the bootcamp crew are taking part in a 5k “Run or Dye” event in October so training for that will be starting soon: bootcamp twice a week, circuits alternate Fridays and, on the other Fridays, a PT session with Lewis. I’ve also just completed a five-week “Kickboxing for Beginners” course – but it’s OK, pro fighters…..there’s no competition!!!

The gym has worked wonders for me, thanks to Dean and the instructors. You’ve given me a new lease of life and a great new group of friends – thank you all!