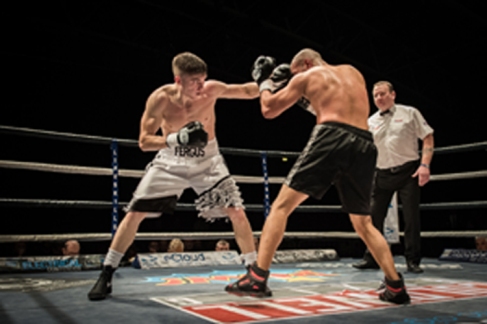 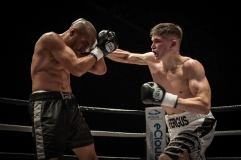 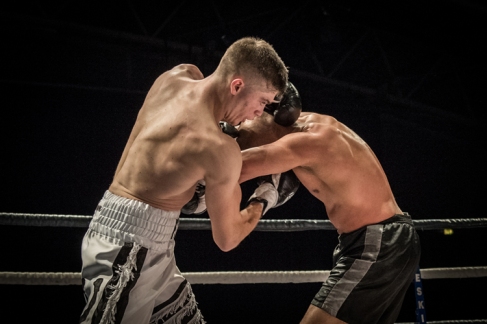 Over 80 members of the Taylor Squad were in Sheffield on Friday 14 November to see Suggy’s Gym boxer Fergus Taylor extend his undefeated pro record.

Fighting on the Men of Steel event, Fergus was up against the experienced and unorthodox Ibra Riaz in a Light Welterweight contest. Following a last minute switch in the schedule, the weigh in for the match took place on Friday instead of Thursday but although changes so late into the weight cut are far from ideal, Fergus showed he was the consummate professional, taking it all in his stride.

From the start, Riaz tried to draw Fergus in but the Suggy’s Gym fighter remained calm and strong, sticking to the game plan and dominating the first three rounds with ease.

In the fourth, Fergus appeared to switch off but was back on track in the fifth and finished super strong in the final round, leaving his opponent cut and bewildered at the end of the contest.

Following this latest victory, Fergus now has just days before his next outing in London on Monday 24 November. Promoted by Frank Warren, the event takes place at the Hilton Hotel in Mayfair and sees Fergus facing former England captain and 2012 senior ABA lightweight champion Josh Leather over six three-minute rounds.

“Josh is seen as a hot prospect and there’s no arguing with the fact that he’s had a glittering amateur career,” said Fergus. “But the professional game is a totally different sport and one I’ve always been suited to, so I’m well up for this one.

“Yes, it will be a real test for me but I’m not concerned about it – if Josh asked Anthony Crolla or Joe Gallagher about my chances, I reckon he’d be the one reluctant to take the fight.”

Both manager Dave Coldwell and head coach Dean Sugden share Fergus’s confidence about the outcome of the match up. “Fergus looked every bit the part when sparring with Anthony Crolla, who’s just had a world title fight confirmed. Personally, I think this will be a tough one for Josh and Dave and I agree it’s one Fergus can win,” said Dean.

“Thanks to financial support from Proud 2 Be Safe, he’s been able to train full time for his last two fights as he pursues his dream of becoming a British champion. He has a great team behind him at Suggy’s Gym and he’s getting stronger and improving technically all the time.

“Although on paper we’re going into this fight as the underdog, with Josh bringing speed and an outstanding pedigree to the contest, we’re confident we’ve given Fergus all the tools he needs to maintain his unbeaten streak in the professional ranks.”