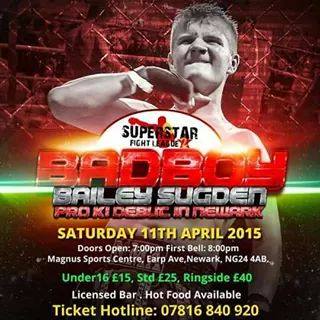 Newark’s brightest and best will be out in force on Saturday 11 April, ready to put on a first class show when Superstar Fight League 2 and Rookies Rumble V come to the Magnus Sports Centre.

In an action-packed evening, both amateurs and professionals from NMA Fitness Centre and Suggy’s Gym will line up to showcase their skills in the ring.

Appearing for the first time as a professional before his home crowd, Bailey ‘BadBoy’ Sugden tops the bill in the main event of the night. Just three weeks after a double victory in his pro debut at the Harrow Leisure Centre, 17 year-old Bailey will be up against Vinny Baldwin, an opponent so far unbeaten under K-1 rules.

“The last Newark show, in October, was a clean sweep for NMA and Suggy’s Gym,” said head coach Dean Sugden. “Expectations will be high for this one but, after 14 years, our shows have a reputation for getting bigger and better each time. Every one of our fighters will be going out there to do themselves, the gym and their home town proud and fans can look forward to an evening of exciting action, with plenty of reasons to celebrate!”

Doors open at 7pm with the first bell at 8pm and a licensed bar and hot food will be available throughout the evening.

Limited VIP places at £40 and advance tickets for unreserved standard seating, priced £25 for adults and £15 for under 16s, are on sale now from NMA Fitness Centre, 49 Castlegate in Newark or via the ticket line on 07816 840920.