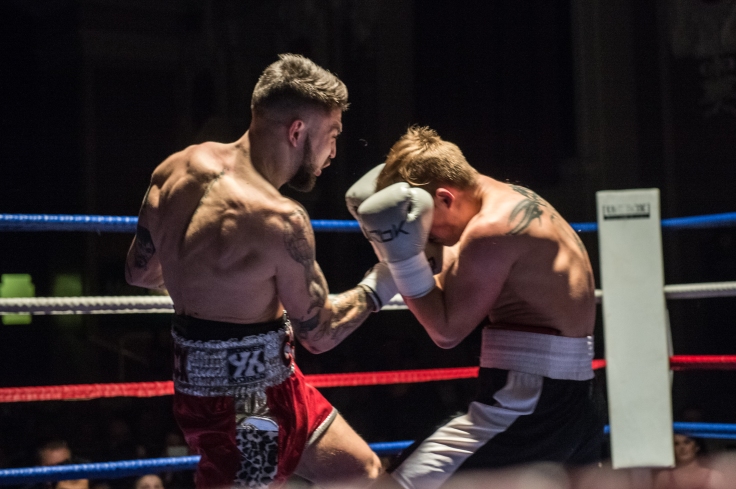 Over 160 friends and fans made the journey to Walsall Town Hall to support Chad ‘2 Slick’ Sugden when he made his professional boxing debut on Saturday 19 March.

Weighing in comfortably at 11st 13lbs on Friday, Chad said he was in the best form of his life and had no doubts about his decision to make the switch from kicks to punches.

“It’s something I’ve wanted to do for a long time and it’s going to be a really exciting and special night for me,” he said. “Travelling the world fighting under K-1 Global and Glory promotions has been a great experience that’s taken me to some incredible destinations but this is what I feel I was born to do.”

It was always going to be about me and how I performed…my combination of movement, timing and variety proved too much for him

Dominating the action from the first round to the last against Deividas, who was previously unhurt and unstopped in more than 26 fights, Chad impressed the capacity crowd with his patience and perfect punch selection. 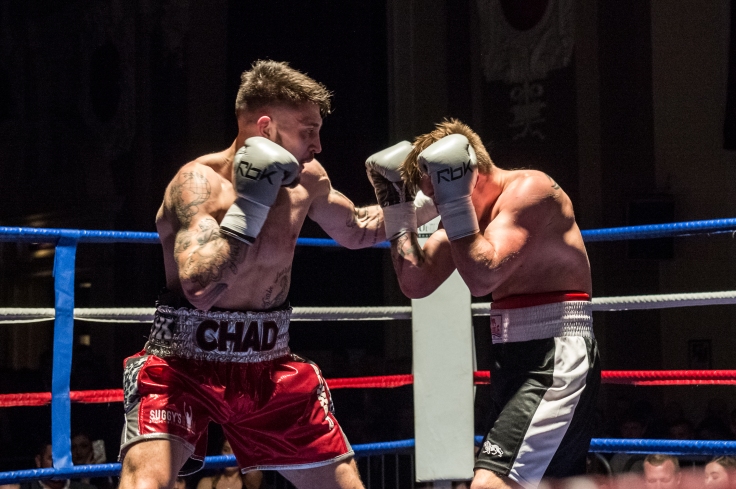 Unfazed by the last minute change of opponent, he said: “I went out there knowing it was always going to be about me and how I performed. Deividas was a tough and game opponent who came to fight but my combination of movement, timing and variety proved too much for him

“With so many supporters cheering me on, the atmosphere was electric. It felt as if I was fighting on home ground and I was determined to do all my fans and my sponsors proud. I wanted to give the crowd a performance they wouldn’t forget – everyone I spoke to afterwards was absolutely buzzing so job done!”

Tonight’s crowd saw a fighter who was not only slick but explosive, a young man on a mission

Among those quick to offer congratulations after the fight was Nottingham-based pro boxing manager and trainer Scott Calow, who described it as one of the best debuts he had ever seen.

“Chad’s performance was perfect and listening to the response from everyone in the hall you would have thought it was the main event of the night,” said Suggy’s Gym’s Dean Sugden, now both manager and coach to his eldest son since gaining his professional boxing manager’s license last month. “Tonight’s crowd saw a fighter who was not only slick but explosive, a young man on a mission to make the same impression on the world of professional boxing as he’s already done in his four years as a pro kickboxer with K-1 Global and Glory.”

With his first victory under his belt, Chad will be wasting no time and already has his sights firmly set on the second, this time in a match-up over six rounds at Walsall Town FC on Saturday 14 May. “His opponent is still to be confirmed but after this performance it will be interesting to see who steps up,” added Dean.