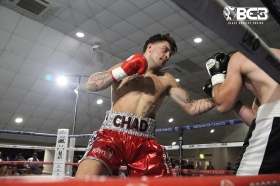 Nottingham-born Light Heavyweight Chad ‘2 Slick’ Sugden added a second KO victory to his pro boxing record on Friday 1 September, when he defeated Norbert Szekeres of the Czech Republic on the card of On The Edge.

A capacity crowd was at Walsall Town Football Club’s Bescot Stadium to see 23-year old Chad take the win with a stunning left hook just two minutes into the first round.

On paper, the fight had all the makings of a tough test for the Suggy’s Gym boxer, who was up against an opponent with a professional record which included 18 wins, nine of them by KO.

But Chad, sporting the Nottingham Forest FC badge and Newark’s Badge of Honour, looked every inch a world beater in the light heavyweight division on Friday. And, as he predicted earlier in the week, he gave the crowd a performance above and beyond anything they had seen from him before.

Asked ahead of the fight about the late change of opponent, he said: “It’s something I’m used to but if you focus on your opponent and things change, as they often seem to do, it can wreck your head. So I’m always focused on me and my own performance, on going out there and enjoying myself.

“And moving up to the heavier division suits me, it isn’t as stressful on the body. Working very closely with Bobby Madge on the nutritional side of things, I’m now pretty sure my future lies at Light Heavyweight, alongside the likes of Anthony Yard, Frank Buglioni, Calum Johnson, Jose Burton and Bob Ajisafe.”

Fulfilling his promise to put it to his opponent from the outset, Chad started fast and landed some good punches to Norbert’s head and body. Norbert fired back but in the main most of his punches were avoided by Chad, who lived up to his ring name 2 Slick as he stood close to his opponent picking his shots.

Caught with a decent right hook, Chad responded with a series of uppercuts which saw Norbert’s head come flying up, then went on to exchange a barrage of hooks with the Czech fighter which could easily have caused a weaker opponent to take a count.

When Norbert tried to fire back, Chad just re-adjusted his footwork and set up a beautiful left hook which sent his normally strong and durable opponent to the canvas for a count of 10 and the referee waved off the contest.

Interviewed ringside after what was described by promoter Black Country Boxing as ‘a perfect first round stoppage’, Chad paid tribute to the 150 members of the ‘2 Slick army’ who were there in force to cheer him on. “I said I wanted a loud crowd tonight so thank you Newark and Nottingham for coming to support me as always. I’m back out in November and looking forward to seeing – and hearing – you all in a couple of months when I do it again.”

“Given that there were two boxers from Ricky Hatton’s stable on the card in Walsall, Chad stood out for all the right reasons,” said his manager and head coach Dean Sugden. “He had the biggest and loudest support by far, who raised the roof when he knocked his opponent down with that left hook. And without doubt his was the biggest and best performance of the night; not many foreign boxers come over to the UK and get demolished in that fashion.

“Now we move on to the next one on Friday 3 November, when we’ll be boxing on the card of BAD BOYS at the Rockingham Forest Hotel in Corby. His opponent has yet to be named but rest assured that Chad will be looking to put on another explosive display for his army of loyal fans and followers.”