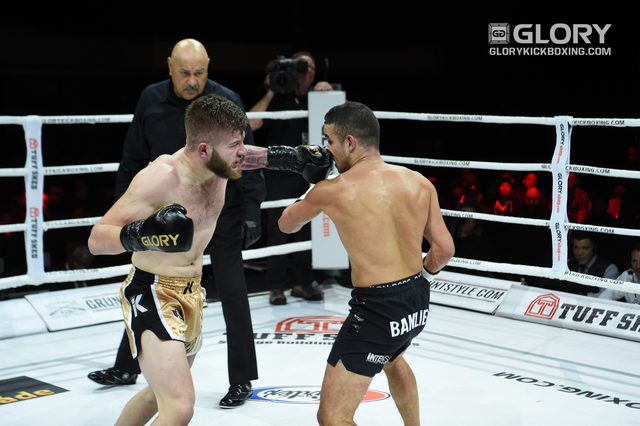 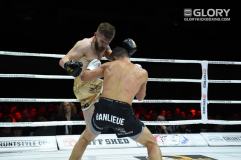 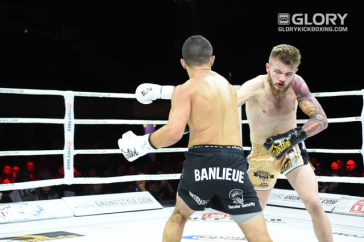 After being bundled and pushed to the canvas in the third and final round of his latest outing on the world’s leading kickboxing promotion GLORY, much to the surprise of Bailey ‘BadBoy’ Sugden, the crowd and the commentators a hotly-disputed knock down was called by the referee, even though the Nottinghamshire fighter had immediately jumped back up.

Shaking his head in frustration, Bailey went straight to work and attempted to land a jumping knee to his opponent Zakaria ‘Double Z’ Zouggary, who fell to the canvas, but no count was returned.

The referee’s decision to give the standing count against the Suggy’s Gym 20-year old came in the closing round of his Featherweight contest with the Dutch-Moroccan Zakaria on the card of the GLORY 52 SuperFight Series, which was streamed live worldwide from Los Angeles on Saturday 31 March.

Going into the fight with emphatic wins on GLORY in New York and Rotterdam last year, the rising star from Newark promised to be involved in the fight of the night.

And although he came away without the win he was looking for, he returns to the UK with many more fans from the US after a back and forth battle against a highly rated opponent ended in a unanimous decision in favour of the number eight ranked Zakaria.

Speaking to reporters after the fight, Bailey said: “There’s no doubt Zakaria was at his best tonight and performed very well. Coming back from his only loss on GLORY, he was extremely dangerous but I love danger and when we exchanged, he frustrated me as he held me when we started.

“He was quick though; I give him full credit for the win, I’d be buzzing and delighted to get the chance to do it again and, with him being 23 and me being 20, that’s very likely.

“But the referee called it wrong in the third round and we weren’t alone in thinking that. As we waited for the decision, commentators Todd Gresham and Joseph Valentini, a former GLORY World Champion himself, both agreed and said that, despite the dubious count after I was pushed and thrown to the ground by Zakaria, we might be going into an extra round.

“That said, tonight just wasn’t my night. I didn’t do what I trained to do, I underperformed and didn’t deliver the game plan we worked on. But make no mistake about it – I will be back, stronger and better than ever, and sooner rather than later.”

Suggy’s Gym head coach Dean Sugden added: “We came to LA for a fight and that’s what we got. We gave the crowd an action-packed three rounds and although we didn’t get the win we promised, with the exception of the judges, everyone watching agreed that Bailey was very unfortunate and that the unjust count was a deciding factor in the result.

“For us it’s always a difficult one to judge at the time as we tend to look at all the areas where we could have done better. But one thing is certain – as ever, we’ll come back stronger, we have to because the only thing we have control over is our performance.

“So it’s onwards and upwards for Bailey and for Suggy’s Gym. There’s a huge announcement coming very soon and we’re confident that with his personality and charisma, not to mention his exciting action-packed fighting style, Newark’s very own BadBoy will have a leading role to play in what is going to be a massive and historic event.”