Newark Amateur Boxing Club was out in force again last weekend, when five of its members represented the club at events held in Grantham and Sheffield.

For Michael ‘Mikey’ Lindsay, Alfie Briggs-Price, Mac O’Brian and Deivids Paulauskas, the action began on Friday 31 May with the Quarter Finals of the East Midlands Box Cup at Grantham Meres Leisure Centre. 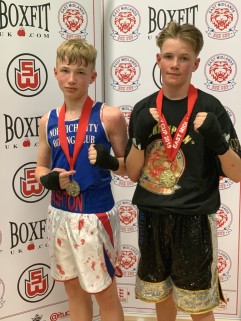 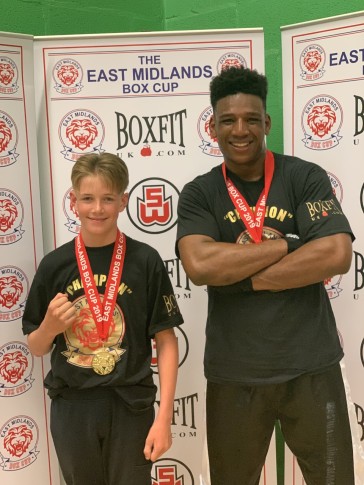 With the Semi Finals on both Friday and Saturday and the Finals on Sunday and three rings in use throughout the three days, the weekend featured some of the best young boxers from across the UK in an action-packed, talent-stacked event.

Both Mac and Deivids came through the Quarter Finals with emphatic wins over more experienced opponents but went out later in the day in the Semi Finals.

Friday also saw Mikey take a unanimous points win in his Quarter Final against the previously unbeaten Joe Locksley from Walsall. The Newark 24-year old went on to knock Bletchley ABC’s Shane Binns out cold with a double left hook in the first round of their Saturday Semi Final match up, paving the way for Mikey to take on York BC’s Arlo Stephens in the Finals on Sunday.

“This was an absolutely cracking Final,  with Mikey setting the pace early on and leaving his opponent wondering what he could do to get back into the fight,” said Suggy’s Gym head coach Dean Sugden. “After the bell at the end of the first round, Arlo hit Mikey with an illegal shot but, despite being a little stunned, Mikey maintained his composure and did the better work.

“Going into the third, we thought we were ahead but to be sure we got Mikey to put more pressure on his taller opponent. In this round Mikey wobbled Arlo and the referee stepped in to give him a count and, although Mikey got caught with a heavy shot just before the final bell, he reorganised and came back strongly.

“After three hard-fought rounds in which Mikey landed some massive shots and dominated the action from the get-go, there was no doubt in anyone’s mind which boxer was going to get his hand raised as the East Mids Box Cup Super Heavyweight Champion.”

Sunday’s Finals saw a second victory for NABC when Alfie Briggs-Price defeated Ashton Nellor from Norwich City by a second round stoppage. “Alfie showed some big improvements in this contest,” added Dean. “He looked really good, listening and boxing to instruction throughout the bout, and I’m absolutely delighted for both Mikey and Alfie, winning Gold against such tough competition.”

Completing the weekend line-up for the club, two-time National Schools Champion Sam Hardy travelled to the Sheffield Institute of Sport on Sunday to take part in the England Squad selections.

“Sam’s been selected to train again and will be looking for selection in the European Championships in August,” said Dean. “This whole weekend will be an enormous boost for all the kids and adults training at Suggy’s Gym – now all eyes are on Chad Sugden, who will be boxing Nottingham’s unbeaten Sebastian Slusarcyzk on the card of BRAGGING RIGHTS at the Harvey Hadden Stadium on Saturday 6 July.

“We’re all looking forward to seeing Chad in action and to bringing another professional boxing title home to Newark at the end of the evening.”