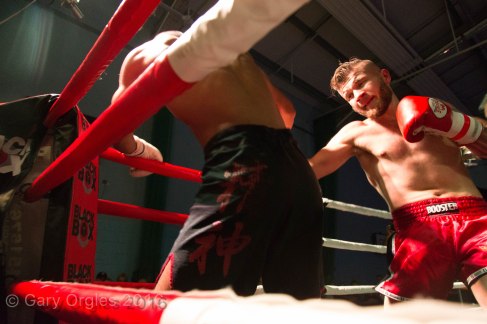 A capacity crowd raised the roof at the Magnus Sports Centre on Saturday 1 October, as local favourite Bailey ‘BadBoy’ Sugden brought The Road To Glory 3 to a close with an explosive performance.

In his sixth professional fight, the Suggy’s Gym 18 year-old went head to head with the big punching current Ultimate Gladiator champion Irtaza Haider, trained by Paul ‘Semtex’ Daley in Nottingham, for the main event of an action-packed card which produced seven wins for NMA in the lead up to Bailey’s own decisive victory.

With both fighters’ undefeated pro records at stake, the scene was set for a memorable match-up. Already electric throughout the earlier fights, the atmosphere went up a level as Bailey treated the crowd to another of his entertaining walkouts before taking on Irtazar.

“There was a lot of excitement in the build up to this one,” said Suggy’s Gym head coach Dean Sugden. “Although the two hadn’t sparred together, they’d both sparred with the same people in the past but this was the first time they’d met in the ring.”

Fighting at 65kg under professional Glory K1 rules over three three-minute rounds, both boys wasted no time going about their work.

From the start, Bailey’s punching and low kicks were making Irtaza unstable and leaving him unable to counter effectively. Despite being encouraged by his corner to push forward, he seemed a little reluctant to do so as Bailey showed an elusive side to his game, turning Irtaza and countering his attempts to come back.

“It was a competitive and close contest but I love a fight,” said Bailey. “Going into the third round, I landed a big spinning back fist which looked to have stiffened Irtaza’s legs. And although I didn’t capitalise on that, I rocked him with some ferocious hooks right on the final bell. The crowd went wild as the unanimous decision was announced and I celebrated my sixth professional victory.”

Big things are on the cards for the youngest of the three Sugden brothers next year, with an 8 Man Tournament under Glory Rules kickboxing and a massive cash prize at stake for Bailey on Saturday 22 April at Grantham Meres Leisure Centre.

Earlier in the evening, the action began with a great return to the ring for Emma Porter who battled tirelessly throughout a three-round contest against a taller opponent in Lisa Nichols from Wolverhampton to come away with a well-deserved points win.

Next up was Tom Grocock, making his debut for NMA in what many thought was the fight of the night against Ollerton’s Jack Godber. The action went back and forth, with Tom coming out on top at the end of the three rounds.

Despite coming up against a more skilled opponent in Callum Atkinson, NMA’s Ben Wint fought his heart out and, although it was close, Callum took a well-deserved points win back to Ollerton.

In the fourth fight on the card, Tom Mulligan from NMA and Stef Griffiths from The Elite Fight Academy in Ollerton were well matched. Both boxers looked battle-worn at the end of the contest, as Tom just nicked it on a split decision.

NMA’s amateurs were on fire, with the wins coming thick and fast, first for Thomas Rawlinson against Mitch Werezak from 4th Dimension and then for Connor Meanwell against Manor Thaiboxing’s Anth Hollis.

Jason Freeman pulled off a fantastic win with an impressive display of skill against the strong and capable Jake Falconbridge from 4th Dimension. Then it was Connor Walsh’s turn to take another victory for NMA, returning to the ring after a three-year lay off to beat the previously undefeated Kane Birring, also from 4th Dimension.

It was England against Spain and kicker versus boxer in the headline fight on the amateur card, as local girl and current ISKA English champion Megan Williams took on her Spanish counterpart Noelia Rueda in a battle for the ISKA European K1 Cadet title.

Although 15 year-old Megan struggled at times to get on the inside due to the quality of kicking from her opponent, going into the final round it was two apiece with everything to play for. “I think we just got hustled out of the third round but the decision was a fair one,” said Dean. “There are too many shows up and down the country where home fighters are getting the nod when perhaps they shouldn’t but in Newark we pride ourselves on real fights, officiated by the very best.

“Noelia took the European title but Megan is young, she’ll get her shot again and next time fans will see an improved version of the fighter who was in the ring on Saturday.”

The joint main event of the evening began with an amazing ring entrance by Kick Fit’s Amarjeet Singh who was up against Manor Thaiboxing’s Robert Barry. After a very good first round, Amarjeet was unfortunately unable to carry on and retired to his stool as his ribs had been broken by a hard kick from his opponent and Robert’s was the hand that was raised.

“This one replaced the previously scheduled pro fight between Jack Layton and Thomas Daniel,” said Dean. “Jack pulled out, claiming he wasn’t ready, which came as something of a surprise to us since he’d been on the card for eight weeks leading up to the night. He said he’d lost focus because his opponents kept changing but in this game that happens all the time. He definitely had an opponent but quite clearly didn’t fancy fighting Thomas.

“Full respect to his club mate Irtazar Haider though, who came to fight against the much-fancied Bailey. This was a real 50/50 fight, with a lot at stake as both young fighters want to move on to the bigger stage.

“All in all, The Road To Glory 3 was the best one yet which is saying something, given that Suggy’s Gym and NMA have been putting on shows for 16 years now. Commentator for the night and internationally renowned expert Malcolm Martin summed it all up when he attributed its success to our great match making, something which is key to all the shows we promote.

“We’re all still buzzing at the moment and down at the gym we’re seeing new members, inspired by nights like this, coming along to start training with us. Information about our classes and courses can be found here, by visiting the gym at 49 Castlegate in Newark or calling us on 01636 605708.”