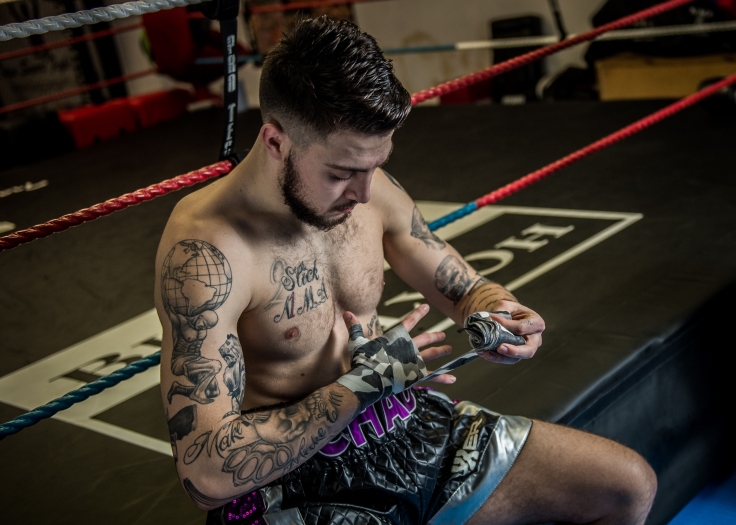 Local fight fans won’t have far to travel to be part of the crowd supporting Nottingham-born Chad ‘2 Slick’ Sugden when he returns to the ring later this month.

Making his pro boxing debut on home ground, the Suggy’s Gym 23-year old will be fighting on the card of Boxing Returns To The Banks at Bingham Leisure Centre on Saturday 24 June, moving up to Light Heavyweight to take on Latvia’s number one ranked boxer Raimonds Sniedze.

“After a few months out of the ring, we wanted our focus to be on getting fit rather than on losing weight at this stage, although our intention is to return to Super Middleweight for the next one,” explained head coach and manager, Dean Sugden.

“In Raimonds, Chad will be up against a tall and game opponent with an impressive pro boxing record of 12 wins with 8 KOs. But at Suggy’s Gym we like to keep it real, to put our fighters up against opponents who are going to test them and that’s why they all get such a strong following every time they fight.

“Last time out, Chad had a terrible camp with virtually no sparring or running due to late recovery from injury and, with hindsight, we probably should have pulled the fight or reduced the number of rounds. We didn’t but experiences like this only make us stronger and we take away valuable lessons from them, not just about what we should have done differently but also how to understand and be ready to deal with factors outside of our control.”

Originally scheduled to fight in Bingham in February, Chad was forced to withdraw from the card when his opponent pulled out due to illness. “As always, we did our best to go forward with a new match up and I was gutted when we had to make the decision to withdraw, not only for myself but for all the fans who had already committed to supporting me on my own turf,” he said.

“So I’m delighted to get a second chance to showcase my skills this close to home and we’re leaving no stone unturned preparing for it. I’m bigger, stronger both physically and mentally and we know exactly where we’re at with this camp.

“My sparring’s back on point, with some quality work with Gary Mayor and Dan Cooper already in the bag. Most recently, I really enjoyed six rounds sparring with former GB boxer Anthony Fowler and Dave Coldwell has commented on the fact that I’m looking big and strong. I’ve got more sessions lined up, with Jason Cox among others – no disrespect to Raimonds but these guys are another level and I’ll be looking to prove it on 24 June.”

The Bingham card also features five more of the best fighters in the county and with so much local talent on the show, tickets are being snapped up quickly. “We have a limited number still available but it will be first come, first served so anyone wanting to join us in Bingham needs to get in touch as soon as possible,” added Dean.

“With Chad’s upcoming fight, Regis’s victorious return to the cage last month attracting some exciting offers from the MMA world, Bailey preparing to make his GLORY debut at New York’s iconic Madison Square Garden in July and Jay Chadburn building his experience across all disciplines before deciding which direction to take, things could hardly get any better for everyone involved with Suggy’s Gym. Add the prospect of Road to GLORY 2 in Grantham on Saturday 7 October to the mix and it’s no surprise that there’s a real buzz down here right now.”

Tickets for Boxing Returns To The Banks are £60 VIP Ringside and £35 Standard, on sale from Suggy’s Gym in Newark or via the ticket hotline 07816 840920. Doors open at 7pm, with the first bell at 8pm, and a fully licensed bar and food will be available throughout the evening.