It was Fight Night Friday in Farndon on 8 February, when Newark Amateur Boxing Club’s Home Show returned to the Memorial Hall for the fourth time with an evening of exciting and entertaining boxing featuring 10 of the club’s rising stars. 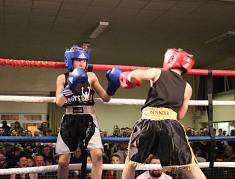 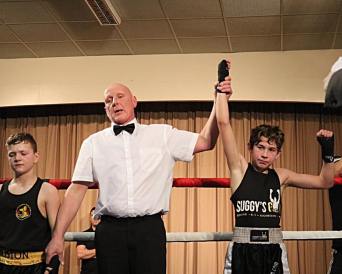 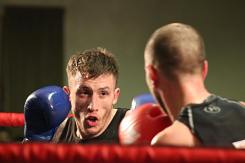 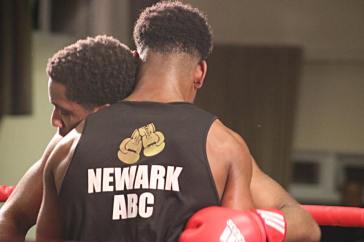 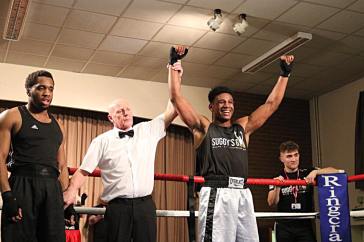 First up for Newark was Lauren Workman in a skills bout with Boston ABC’s Lili Reed. Lauren’s hard work in the gym clearly paid off as she went through the three rounds demonstrating increased confidence and belief in her ability and throwing some lovely combinations.

Then it was the turn of Chloe Davies, up against Charlie Davey from Xbox Worksop in another skills bout. Making the most of the opportunity to gain experience for future full bouts, Chloe controlled the contest from the centre of the ring, showing that she has turned a corner recently in her training and in the eyes of her coaches was technically the better boxer of the two on the night.

The first full contest of the evening, featuring Deivids Paulauskas in a bout against Harvey Harmon from Boston ABC, set the tone for what was to come as both boxers started fast and fought hard to take control of the match up.

Rewarded for his performance in the first round when the referee gave his opponent a standing count, Deivids took the round 10-8 before Harvey came back in the second to make the contest exciting again. After an even third round in which both boxers had success, to the delight of the home crowd Deivids took the win on a split decision.

Another exciting bout followed when Alfie Briggs-Price entered the ring against Riley Holmes from Legions ABC. Alfie started well and looked in control as, with both boxers going all out to win, the crowd began to make some serious noise.

The referee gave a standing 8 count to both boxers in this contest as a precaution for some shots landed but, after the final bell, the judges all gave a well-deserved win to Alfie by a unanimous decision.

Next in line for Newark was Sam Hardy, who was boxing Bracebridge’s Larry Rooney for the second time. Although Sam took the win on the previous occasion, a re-match had been called for as both boxers believed they would win.

Sam got off to a good start, working with strong shots from the centre of the ring which resulted in him winning the first round. In the second, a punch thrown by Larry that hit Sam on the shoulder was judged by the referee to be a big shot to the head and, erring on the side of caution, he gave Sam a standing count.

As Sam proceeded to turn it up a level, pushing forward with some fast punches and explosive combinations, the ref gave Larry a standing count in round two. After a third round that was similar to the first, with Sam taking control, another unanimous decision was given in Sam’s favour, making it three wins in a row for Newark.

Stepping into the ring against Eastgate ABC’s Joshua Surtees, Newark ABC’s most improved boxer of 2018 Mac O’Brian was up next. With both boxers having similar records this was always going to be a hard-fought contest but, despite showing his toughness on the night, Mac clearly was not feeling his usual self and failed to do what all of his coaches know he is capable of.

The decision went to Joshua but the bout was another learning curve for Mac who will no doubt come back even stronger, as he has done in the past.

Two more boxers with similar records and style were next on the card, as Connor Meanwell boxed Ben Gore from XBox Worksop. Despite the similarities, the Newark fighter was simply better in every department and the contest was stopped in the second round in Connor’s favour, giving NABC its fourth win of the night.

Making his debut for NABC, Jay Chadburn was up against a tough opponent in Richard Morgan from Harworth and Bircotes Boxing Centre. With a fighting style much like that of Mike Tyson, Jay was straight off the mark, a power house of lateral movement, quick punches and great body shots.

Finding his range early on in the opening round, Jay landed a beautifully time right hand that wobbled and stiffened his opponent’s legs. The referee stepped in to give Richard a mandatory 8 count but, seeing him blinking and looking distressed, waved the contest off to save him from further damage, giving Jay a win by TKO in his amateur boxing debut.

Another fighter walking out for Newark ABC for the first time followed as Loz Fiorentino went head to head with Cevil Bishop from Lucky Star Community ABC. With both boxers weighing in at 87kg, they had to stay sharp and make sure they were not caught with a big shot.

The first round started fairly evenly with each of them landing some good shots before Loz put together a nice combination that knocked down his opponent. Although Cevil got back to his feet, the referee ruled that he was not fit to continue and stopped the contest to give the Newark club yet another win.

As the evening drew to a close, it was time for the fight of the night, with the Super Heavyweight East Midlands Challenge Belt at stake in a clash between defending champion  Odea Okwonsa of the City of Leicester ABC and Newark ABC’s  Michael ‘Mikey’ Lindsay.

After a competitive opening round which saw both boxers having success, in the second Mikey started to use his right hand to great effect. Beginning to look tired and in a lot of trouble, Odea was unable to find a way deal with Mikey’s pressure and kept holding, eventually receiving a warning from the referee.

The Newark fighter bossed the rest of the fight and scored some counts before the referee stopped the contest towards the end of the final round and, with the capacity crowd chanting his name, an ecstatic Mikey was declared the new East Midlands Champion.

Summing up the evening, Suggy’s Gym head coach Dean Sugden commented: “A big thank you to all the sponsors, without whom we wouldn’t be able to put on shows like this.

“It was yet another fantastic night, not only for the boxers and coaches but for all the families, friends and fans who turned out in force to support the club once again. And what a great ending to a great evening with a new Champion for Newark ABC.

“We’ll be back with even more of the same later in the year, when the Home Show returns to Farndon in September and November to showcase the skills of some of Newark’s brightest and best young boxers.”